Today, this is the OFFICIAL MAP of BELIZE 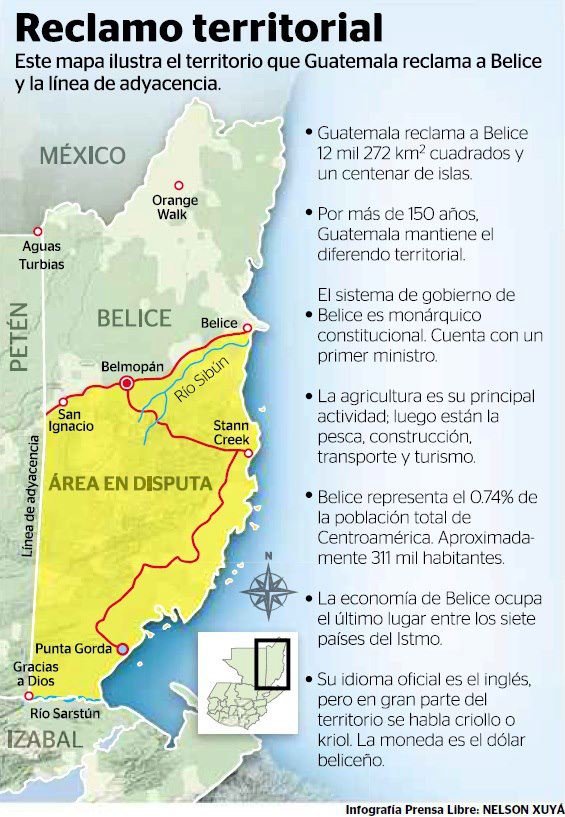 It seems to me that Belize got Set up, Swindled and Hoodwinked, …before the suggestion to take Guatemalan’s claim to the ICJ , it seemed to be going well for Belize Internationally. We had our issues but we were developing…Guatemala for the most part was not an issue for us and the Guatemalan claim for Belize was dying a natural death; I would argue that any claim by Guatemala  in the world arena  would  be seen ridiculous as the world has given Belize LEGITIMACY in every world organization….

Lo and Behold, enter the brilliant yet inept legal minds in Belize, the ones who bill our taxpayers for self benefiting pursuits, the same brilliant legal minds who have yet to effectively address or solve our internal failing justice systems,  decides  to become legal super heroes  and take up a centuries old issue and solve a claim already settled with our induction into the U.N.  They agreed and signed a contract, without any previous consultation with the Belizean people, to risk our sovereignty.  They ask Belizeans NOW to trust them, and vote yes for our future to be determined by Judges who could care less how their vote affect us.  A vote where  ONLY Belize  stands to lose.

Today and 30 plus years after Independence we are being told by the very leaders who have raped our natural resources, our public coffers, enriched their family and friends and sold us out to the highest bidders to trust them wholeheartedly and take Belize claim to the ICJ to establish our  already established sovereignty…in their arrogance, unquenchable quest to prove to the world what is already accepted, over-confidence and maybe a sweet lingering anticipation for a Nobel Peace Prize or likely oil and trade contracts to fatten their law firms….  decide to legitimize a dead claim, accept blood money to buy our people the same way they buy votes and citizenship to win elections.

Suddenly Guatemala’s claim comes off life support and becomes relevant once again and as you are witnessing,  Guatemala is wasting no time and using it to their advantage to make their public relations argument to the world and likely the ICJ …now it gives Guatemala grounds to make a stand in what was a ridiculous claim. Belize has handed Guatemala legitimacy, simply by agreeing to this nonsense.

In our leaders’ blind trust and more likely love for the European and American money;  they push Belize down an amnesic path, forgetting the magnitude of woes Europeans and Americans have created in Belizean society…. Motherland England,  Ashcroft, Prosser, McAfee and maybe quite a few unknowns have instrumentally stripped our country of wealth, reputation and democracy with the willing enabling help of the very Bar members arguing for us to go to the ICJ and trying to convince us that they have Belize’s best interest at heart.  These agents of first world countries come to Belize and tell us how to think and what is good for us and our misguided leaders drunk in their power, believe they speak for us and saw no need for prior consultation before subjecting the entire country down this path.  Our leaders lack foresight by their failure to acknowledge we live in a corporate world, a new world order where governments are nothing more than agents for corporations and oil companies….

Here is a quote from the British Government on the claim:

“The UK is interested in this issue because we are a supporter of strong international institutions such as the ICJ, and regional organisations such as the OAS and SICA. We are keen to see a long term solution that will benefit both Guatemala and Belize, and to support the OAS’s efforts to promote wider regional stability and development. It is also important that Belize and Guatemala resolve their territorial dispute to continue developing regional and economic integration.” source: http://ukinguatemala.fco.gov.uk/en/about-us/working-with-guatemala/uk-bzgt/

So Now Guatemala is redrawing maps and making a mockery of us.  This is exactly what Guatemala wanted all along …a world audience to revitalize an old dying claim and maybe convince the political body of the ICJ  to make a “legal” ruling in their favor.   One thing I have learned, the dumbest people are the most educated at times. They lose their common sense; they become arrogant trained monkeys who believe a degree gives them superior intellect.  They are normally the easiest to prey on because one just needs to pander to  their super egos and play up to their elitist perception of intelligence.  I pray my Belizeans Vote NO and then put our leaders in check! They work for Belizeans, and they should serve Belize always.  Is it possible a deal has already been ironed out and they just need the ICJ to remove culpability from their actions?   Belize is NOT for gamble and if one inch of soil or sea is given to Guatemala, Belizeans MUST hold our leaders accountable.

24 thoughts on “The Guatemalan Claim is being legitimized with the help of Belize by: Aria Lightfoot”