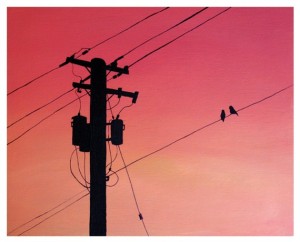 Bernice “Bernie” Toucan sees her friend Doo Doo “Dodes” Chickadee sitting on the wires at the junction of Fortification and Judgement Streets. Dodes looks worried. Bernie decides to go see what’s bothering her friend. Dodes worries about a lot of things. She is easily frightened by everyday happenings but lately, it seems to have gotten worse. Bernie reflects that Dodes doesn’t even seem to smile lately.

Dodes doesn’t look at Bernie but starts talking. “You see Johnny John Crow over there? That’s nevah good. He only come rung when someting bad about fi happun.”

Bernie sighs. “Dodes, you can’t let him bother you. It’s just his nature. He ciant help it.”

At this, Dodes looks at Bernie. “I’m scared Bernie. Things just seem to be getting worse and worse. My daughter’s friend Aaron Pope was killed the other day. Innocent little boy, sleepin in his bed, fuh no reason.” Dodes voice cracks with emotion. “Who is it gonna be next? What has to happen so all these young people realize that all this shooting and killing don’t do nuttin but destroy what little good we have left? Ah feel like nobadi give a shit nuhmo.”

“Dodes. You have to remember that not everybody is like that. There are people trying, trying real hard to get people to start thinking and maybe start doing something to help this situation. Like da gial, Aria. I have been reading her blog and she seems to be really fair about everything…none a dis party politics rass. Shi nu fraid fi nobadi, it seems. People like her, is exactly what we need.”

Bernie smiles at her friend. She knows that the laughter hides Dodes’ fears but it’s still nice to see her laugh a good belly laugh. It’s been too long.

Bernie looked at her friend. She was right. Nobody survived in Belize unscathed and could be downright destroyed when they said what this girl, Aria is.

“Ok Dodes. U have a valid point. But if we don’t help ourselves, who will? U noh tink my ma and your ma had dis very canvasation befo we had independence? People had to get together and fight! U wa end up like Jamaica? Caz ih look like dat fi real. Most ah fi dey people po no rass and deh gat parts a city yu bettah no dare go to. Some a di village dem nuh gat electricity at all! Still? innah dis day and age? Ah nuh want Belize tun like dat mein. U feel mi?”

“Talk fi yourself Dodes! Ah still got it girl!” Bernie thrust her chest out and swung her hips side to side.

The two friends laugh as they remember their blissfully, uncomplicated days as young girls, when nobody was shot and they could walk around at night without fear.  Days when all that mattered was a note from a boyfriend and holding hands excitedly with him as you walk by Baron Bliss grave…well more than walk, a stolen kiss or two. Those days seem so remote now; but, a tiny hope has sprung in their hearts, as they silently pledge their loyalty and lives to fight to take back their country from the clutches of corruption and greed.

2 thoughts on “Birds on da Wire by Fayemarie Anderson Carter”